I run this website using GitHub Pages, and I’ve used VSCode for a long time as a my main text editor, since it has a lot of really cool features. I wanted to make it easy to develop this site using VSCode, since the previous instructions for running the Jekyll/Ruby back-end for testing was … well, tedious … to say the least.

Here’s my setup guide for using VSCode to run a development server for GitHub pages in the background, to make writing and development easier.

This section follows a guide from Sverrir Sigmundarson1. It’s very clear, and if you want full details on installing everything you need for GitHub Pages from scratch, definitely go there. I’m just hitting the main point in this section, assuming you have the site, and just need things to run from VSCode.

I use Windows 10, so I wanted to follow JekyllRB’s instructions on this2; however, because VSCode Tasks run using the local system, we can’t do this via Bash on Ubuntu on Windows3. We need to install everything to the Windows machine.

I picked Ruby v2.3.3, and Ruby DevKit for v2.0-v2.3. The DevKit is a self-extracting archive, so I put it in the same parent folder as where I installed Ruby. 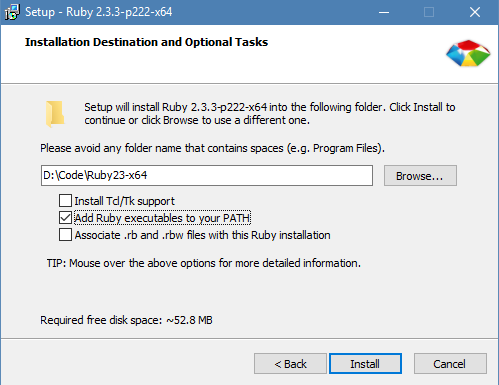 Initialize DevKit and bind it to Ruby installation

You can use the integrated terminal for this. 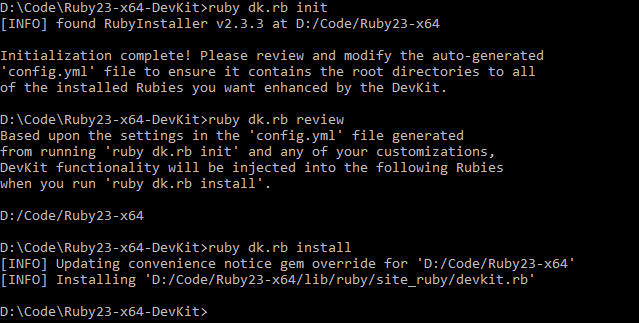 Ruby uses gems to run, and GitHub Pages uses its own to do this. You can install them via

To test everything installed correctly, open up the integrated terminal, and run:

It should look something like this, saying the site is being hosted.

Setting up a build task

Go to Tasks > Configure Tasks, and select the Other option. In the tasks.json file that opens, paste the following:

It should start running as if it was run from the Terminal, but now it’s easy to start and stop, just using Ctrl+Shift+B.

I run this site using GitHub Pages, so here's my setup of how I make it easier to test my site before I make changes, using Visual Studio Code.