Notation and thinking in math

Picture your favourite movie featuring some “smart” person. Where are they standing or sitting? What’s in the background? Chances are there’s a blackboard or whiteboard filled with equations or diagrams. 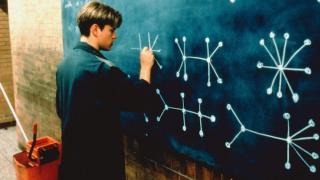 Why is this? Because mathematical notation is a signature of math. It doesn’t matter where you find it, you can always recognize it, even if you don’t know what it means. It’s why movies and media use the “random unrelated equations filling up a blackboard” as a backdrop, even if it’s not central to the story. It’s an immediately recognizable and visual cue to say someone is smart or working on something hard.

between mathematical expressions (or statements) on the written page (or blackboard, electronic document, etc.) and the mathematical objects (or concepts and ideas) in the heads of ourselves, our collaborators, and our audience. A good notation should make this correspondence Notation (and its inverse) as close to a (natural) isomorphism as possible.

All of the different notation in the MathOverflow post above didn’t just come from nowhere. Certain people made decisions for the different types of notation and they’ve stuck around because certain other people liked them. But that does mean that other people learning about something new in math for the first time will have to look at something and learn the notation along with the content. If you have a million ways to say the same thing, it’s confusing. Communication becomes unclear behind the cloud of same-same-but-different notation. This, in turn, makes the concepts themselves unclear.

A key example where people get confused is statistics. It’s not uncommon to see sentences like this in statistics textbooks:

To try and adress this confusion, I now want to talk about some notation for stats and some inspiration for how to think about this notation.

A notation for stats inspired by concepts

I’m not going to stray far from typical math notation. All of this is writable with \(\LaTeX\). But the central ideas I want the notation to focus on are:

As you can see, this notation stems from the centrality of random variables within statistics. Random variables are the things we think about, model, and try to measure. Everything else follows from what we want to know about random variables. Because of their centrality, we will likely be referring to them often, so we want to make a notation for them that is as simple as possible. For this reason, picking a single letter is probably best.

In many applications, random variables can be scalars or vectors/matrices/tensors of discrete or continuous values. We need to be able to reference elements of the matrices clearly. But we also often run into situations where we have multiple random variables that relate to each other in some way. Often, it’s convenient to index them in a similar way. But we can’t confuse element indexing with multiple variable indexing. Subscripts and superscripts are often used for these scenarios. I will also try to avoid confusing indexing with taking powers of random variables, since those appear often, as well. This inspires the next rule.

For example, if we have \(n\) random variables that are all matrix-valued, we can denote the \((i, j)\)-th element of the \(k\)-th random variable as \(X^{(k)}_{ij}\). That covers random variables. The next important consideration are observations.

This makes it immediately clear that \(x^{(k)}\) is an observation of the random variable \(X^{(k)}\). The simplicity of the lowercase also makes it easy to extend variable/element indexing to observations.

Notation Rule 4: Distributions are denoted by cursive or \mathcal letters. For convenience, they can be the mathcal version of letter represnting a random variable.

Operators are tricky. Things like expectation or the probability of an event have to work on discrete, continuous, and even discontinuous variables. They shouldn’t be tied to a single variable. But they’re also more special than functions. They need to deal with condition events, logical operators, and more.

Notation Rule 5: Special operators are denoted with the \mathbb font and square brackets.

Benefits of using this notation

These are the most important rules, in my opinion. They isolate these important statistical concepts in clear and distinct notations. To demonstrate their utility, I’ll review two common scenarios that many people learning statistics trip up on.

What is the variance of the sample mean

What is the mean of your sample? We know that the mean, \(m\), of a set of values is

Note the choice of the lowercase \(m\), since its value is built out of the observations, \(x^{(i)}\) (Rule 3). This means that if we make another observation, our value for \(m\) will be different. The value of \(m\) is itself random, and dependent on our observations. From using this notation, we can see that the value we calculate is actually random. 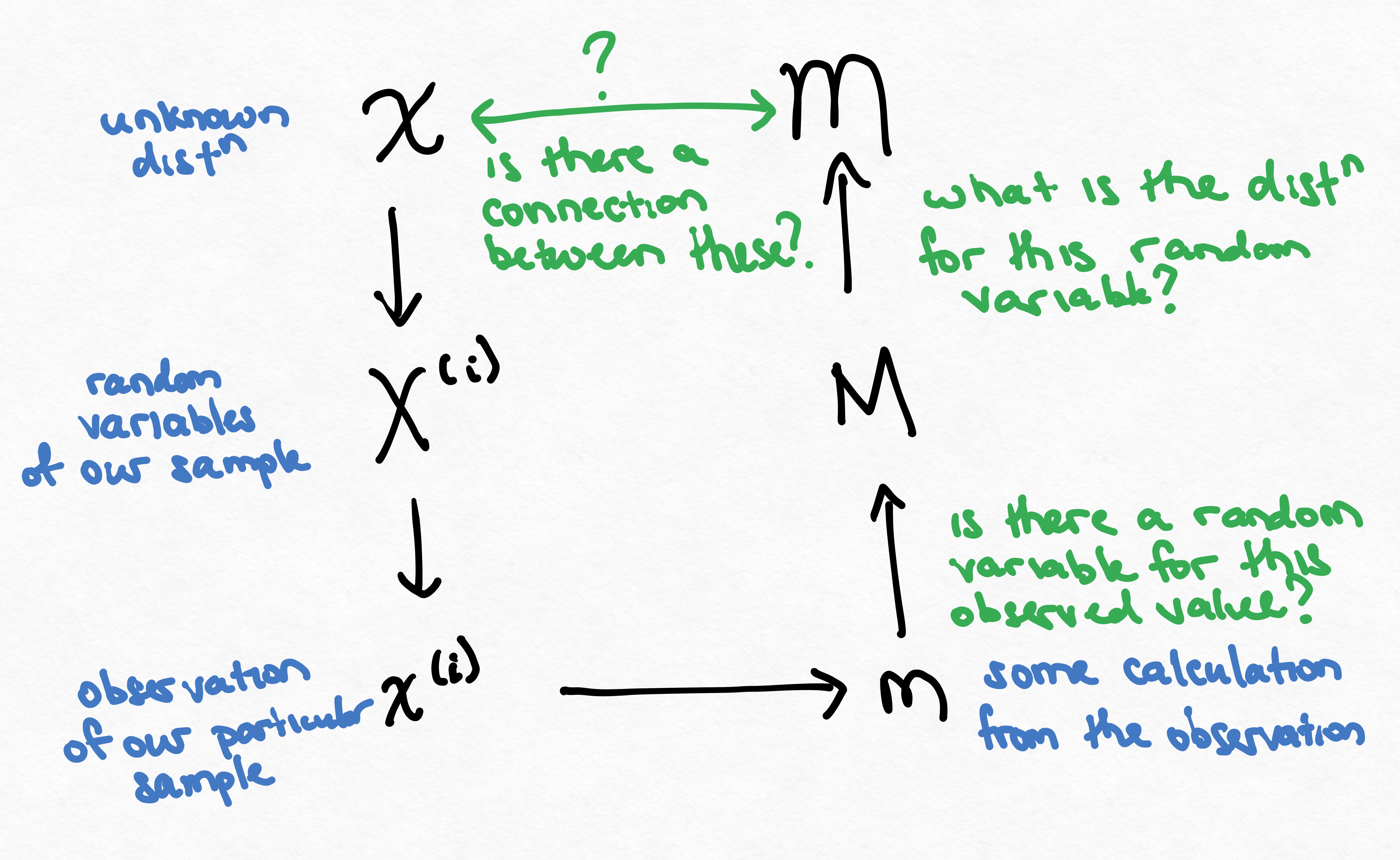 This leads us to immediate questions like “what are \(\mathbb{E}[M]\) and \(\mathbb{V}[M]\)”? or “how can I define \(M\) in terms of random variables”? To answer the latter question, the easiest way to formulate \(M\) is to replace all the lowercase letters with uppercase. Our random variable, \(M\), is then defined by the equation

We can easily see these facts through the notation we use. Separating what \(m\) is from what \(M\) is, conceptually, and why that matters in statistics, is one of the most important things that people fail to grasp, in my teaching experience.

I’ll finish with one more example that trips up a lot of people when they start learning statistics. When we talk about the variance (or standard deviation), why is there an \(\frac{1}{n - 1}\) instead of \(\frac{1}{n}\) for the “sample” compared to the “population”? I propose that we can clear up the confusion that leads to this questions by using clear notation. The clear notation will emphasize what we’re trying to calculate and what objects we’re trying to relate to each other better than using terms like “population” or “sample”.

How can we estimate what \(\sigma^2\) is from our random variables? And how can we ensure our estimates are accurate?

where \(M\) is defined as in the previous section.

Let \(S\) be a random variable defined by

Then \(\mathbb{E}[S] = \sigma^2 = \mathbb{V}[X^{(i)}]\). This is what everyone comes to see as the “sample variance”, which is different from the “population variance”. But at no point did I need to introduce “sample” or “population” as special terms. All I needed was the notation of random variables and distributions. Because of the rules around picking notation, it was immediately clear that constructing something out of random variables was itself a random variable, and that it will have certain properties.

With good notation, and clear rules for it, I’ve tried to show that certain concepts in stats that are tricky for many, are easier than often taught. This doesn’t make stats simple, but does make it easier.

I use the rules listed above when solving stats problems as I find that it significantly increases my comfort level and ability to see when I’ve made a mistake. Hopefully this notation may be useful for others trying to learn some stats.

Mathematical notation is a signature of math. Almost anyone can recognize it instantly, even if they don't know what it is. I want to talk a bit of why notation is useful, why it can be confusing, and tackle some examples in statistics that are often confusin with some clear notation.