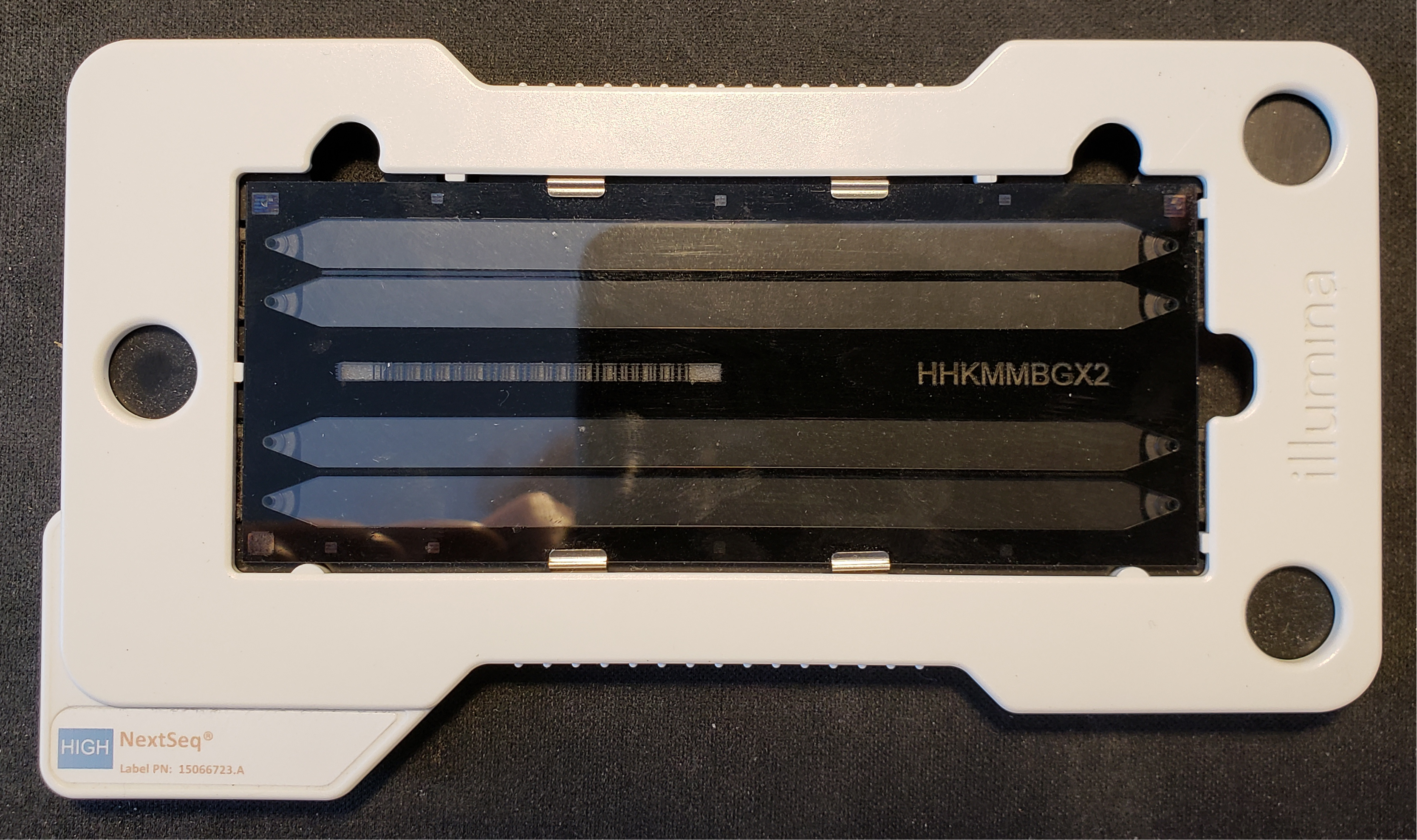 To bring that side of molecular biology a bit closer to home, I got my hands on an old flow cell. In this post, I want to tear down this flow cell and explore some of the different parts of it. I think there’s a lot of really clever engineering in one of these things that’s worth writing about.

I’ll save a few thousand words. Here’s the flow cell. 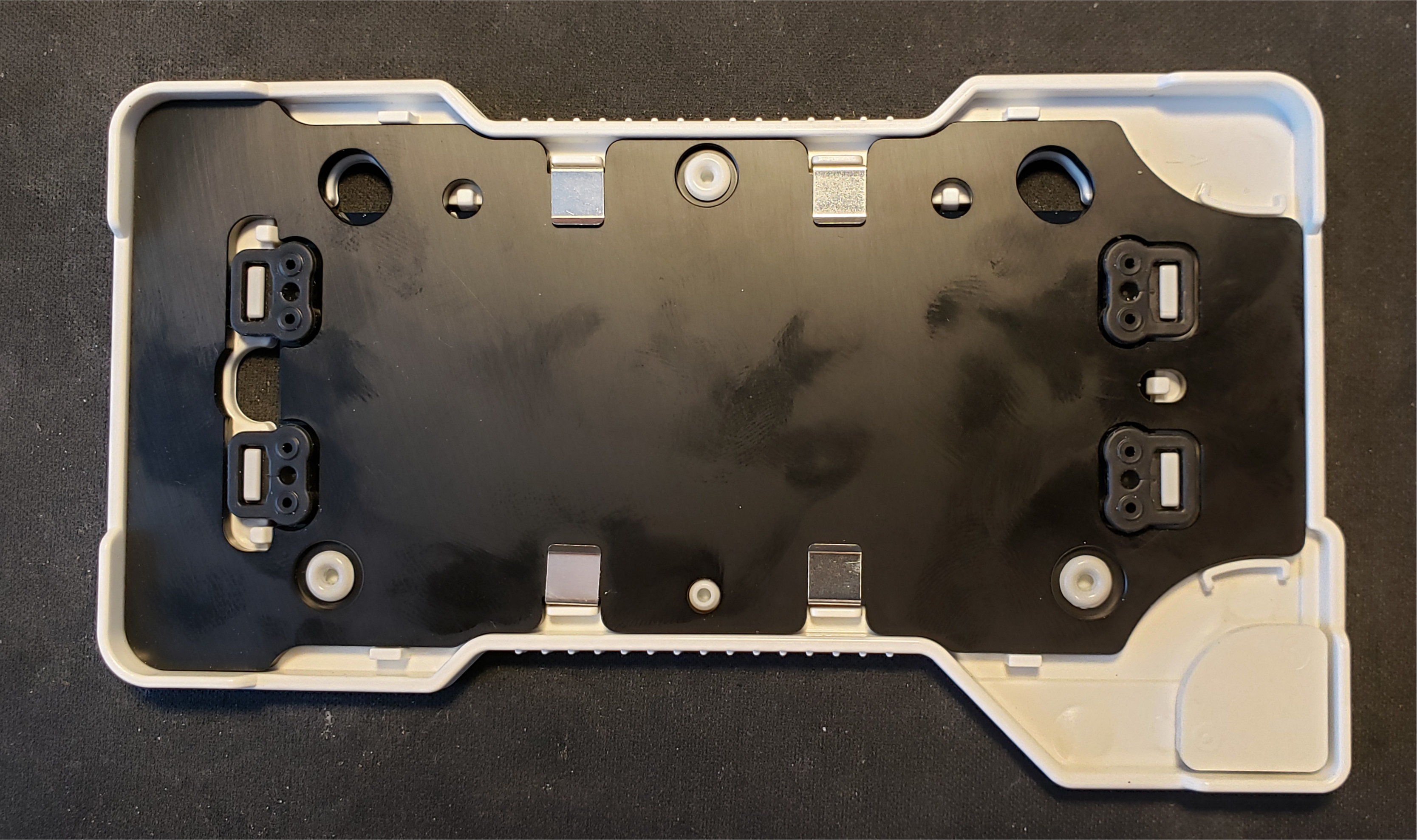 This flow cell is 14 cm x 8 cm x 8 mm in size and weighs a few grams. It’s mainly made of 5 materials: the plastic sheathing, the glass slide, the black metal backing, the aluminium shims, and the rubber stoppers. From the front face you can see the Illumina branding and that it is designed for Illumina’s NextSeq machine. There are mid- and high-output kits for the NextSeq and the sticker in the bottom left denotes this as a high-output flow cell. 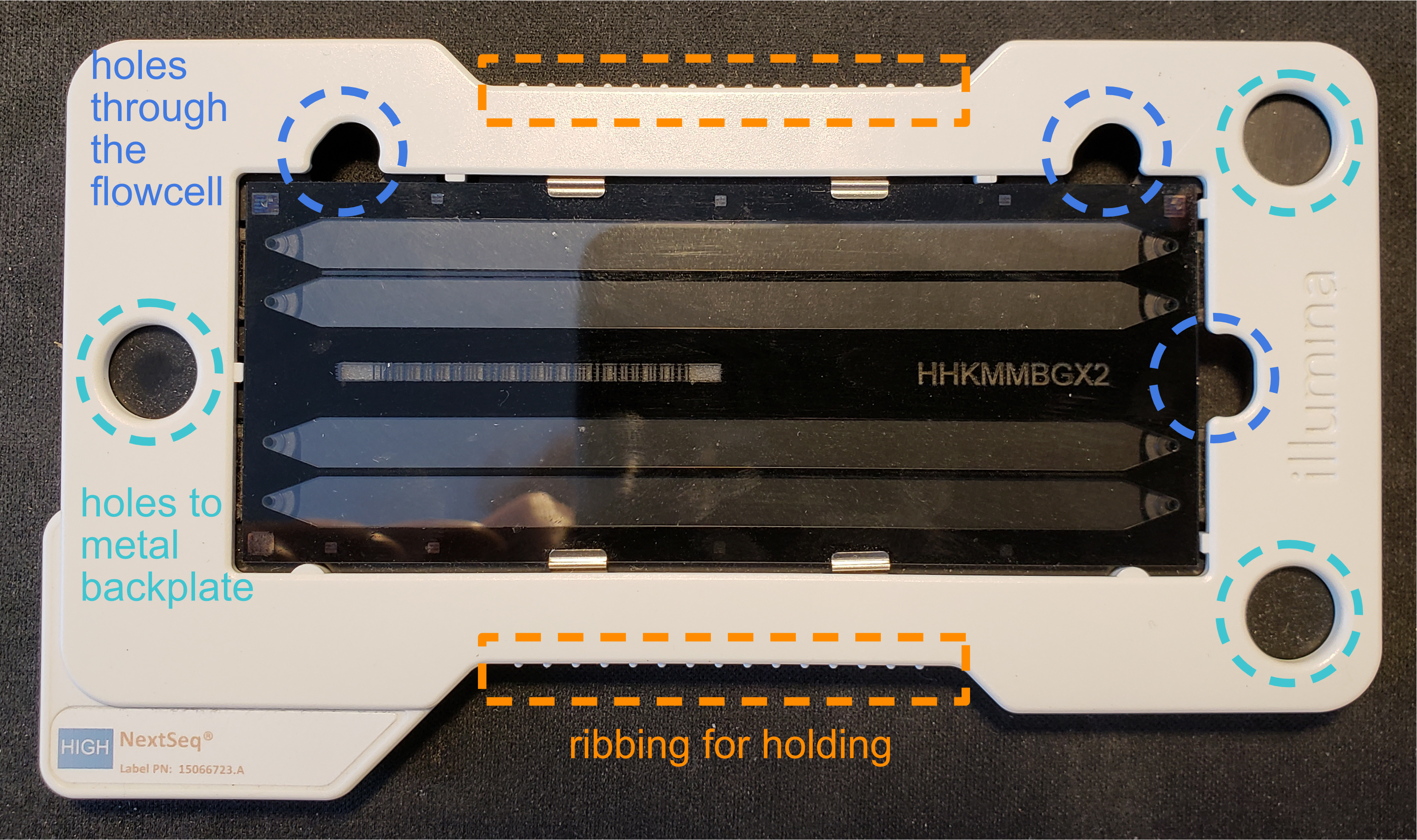 The entire sheathing looks to be one piece, except for the small quarter circle under the NextSeq sticker (bottom right of the backside image). There’s a faint horizontal line running around the entire edge of the sheathing, suggesting these are made by plastic injection molding where the mold is made of a top half and bottom half. I can’t find an injection hole artefact on the outside, so I think the site has either been sanded away or (more likely) cleverly hidden it underneath metal backplate.

There are also four rivets made out of the plastic sheathing on the back. 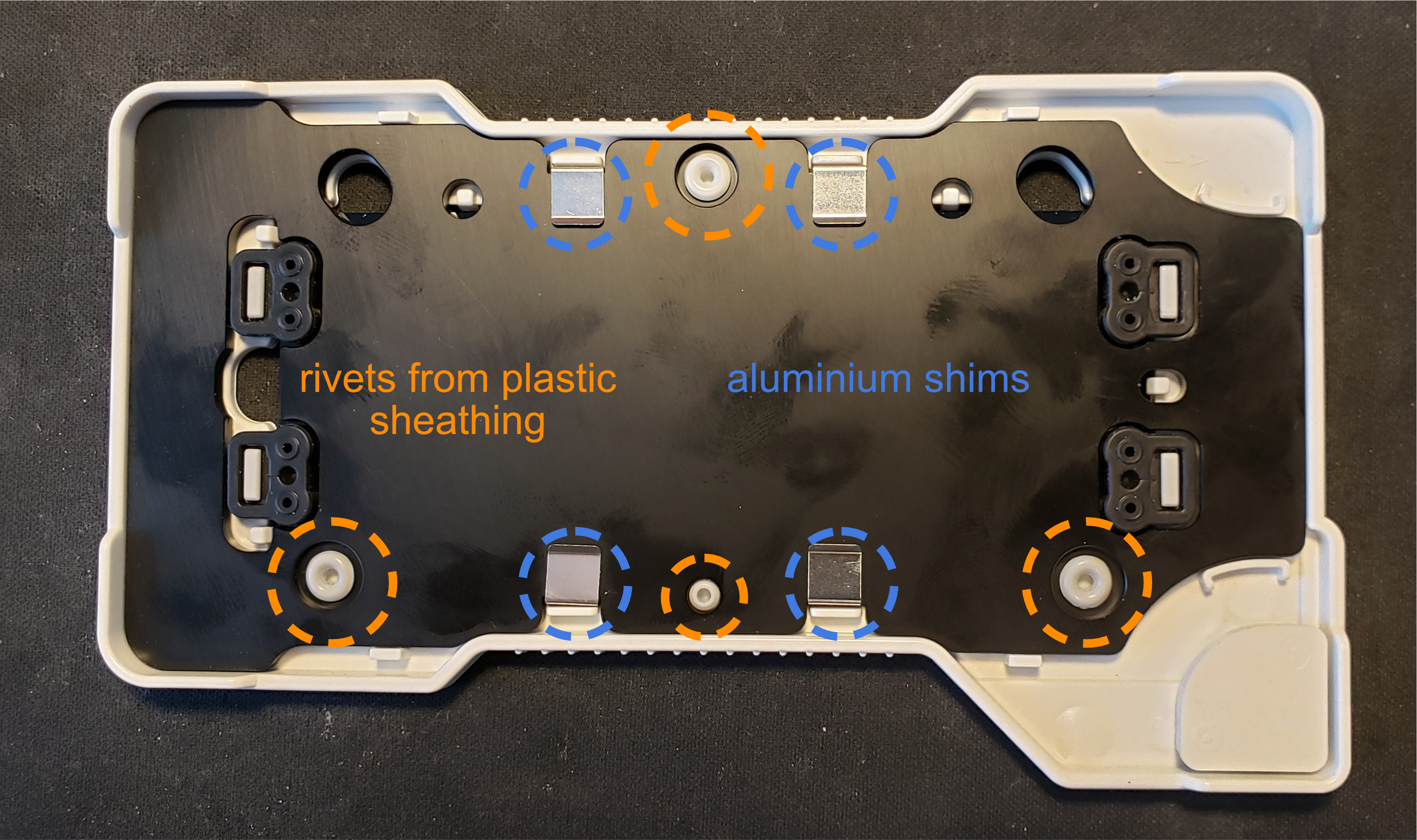 These hold the metal backplate tightly in place and are almost certainly made near the end of the assembly process, once all the parts are brought together. These rivets don’t hold the glass slide in place, that’s what the shims are for. These hold the slide along the z-axis while the plastic bumpers on the front hold the glass slide in the xy-plane. I’m not certain the shims are aluminium, but it’s a lightweight, flexible metal that’s crimped tightly around the plastic and glass.

Underneath the small quarter circle there is a small plastic disc. Given the special housing and placement, it likely contains some information about the flow cell. 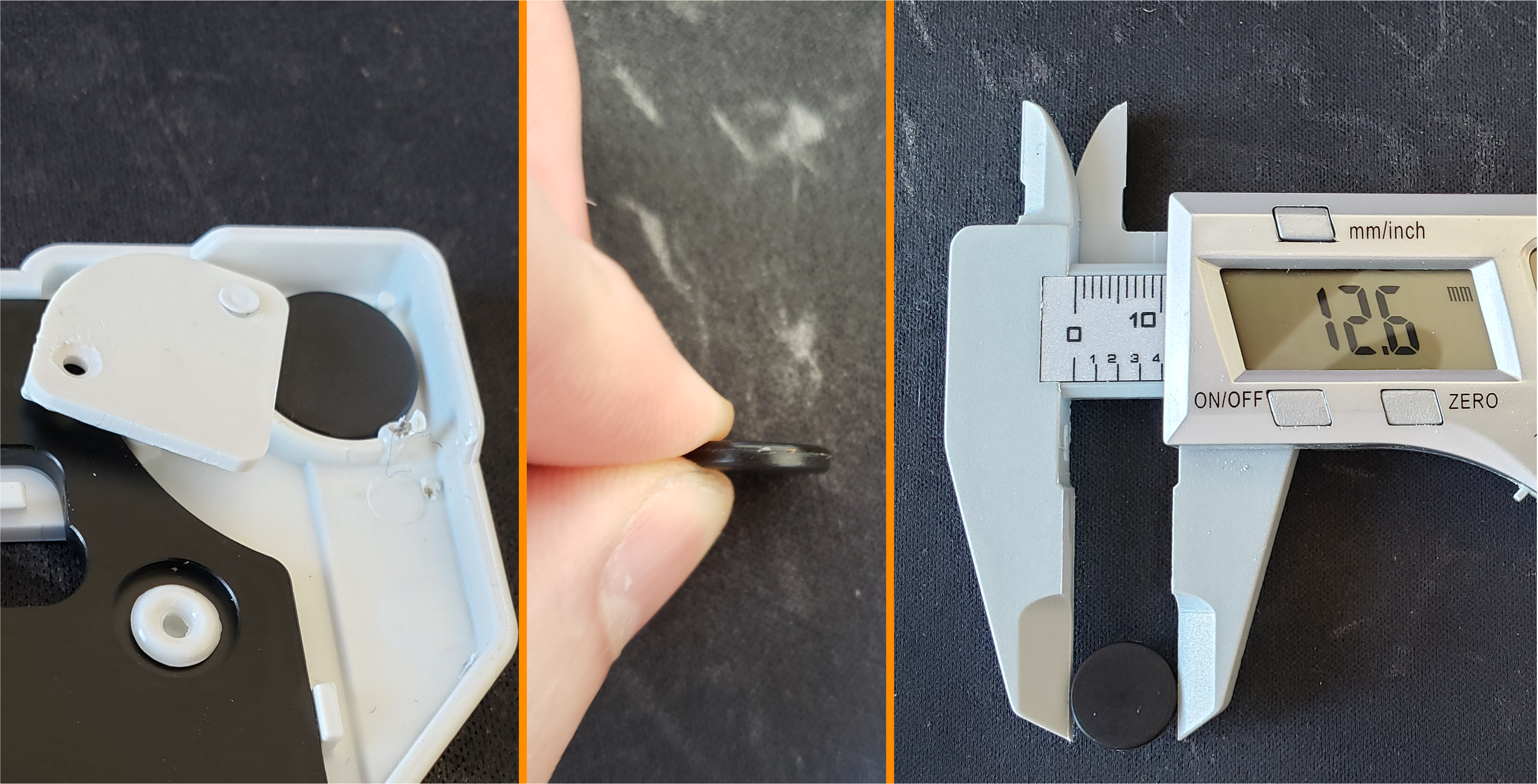 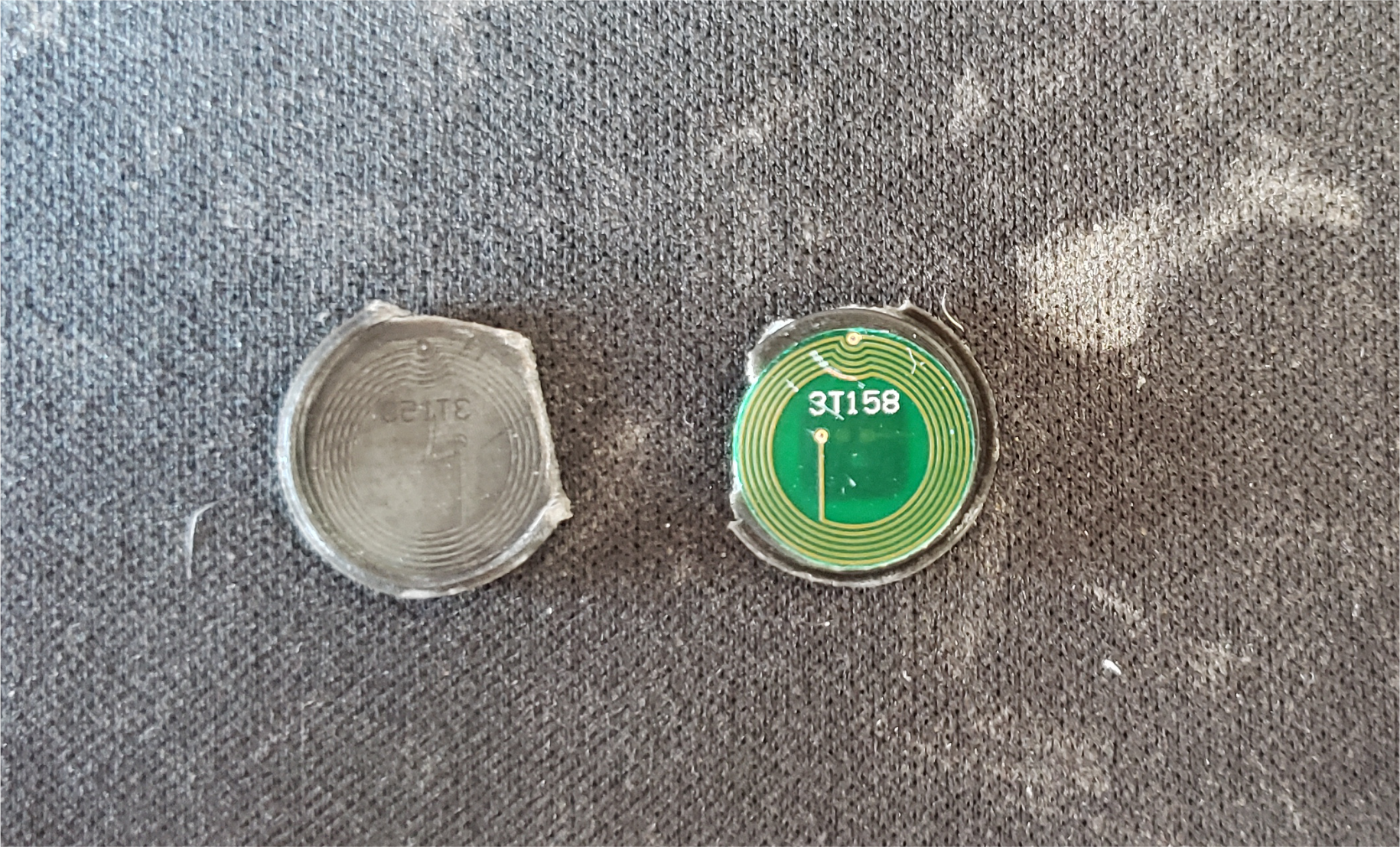 There isn’t much information on it, aside from its tag type and serial number.

If this flow cell was actually used for sequencing, I’d wager that some metadata about the flow cell ID, when it was sequenced, or other small bits of information might be stored on it. This tag makes for easy scanning, and keeping it stored under plastic you have to break to open makes perfect sense.

Finally, you can break the plastic rivets to separate the metal backplate from the plastic. As expected, there’s one final ID code for the plastic hidden underneath.

That’s it for the plastic sheathing. Even in this first part, there’s quite a bit of complexity and non-obvious design decisions for it. I think it’s worth noting that in all of the points above, everything is just about symmetric in the xy-plane, but not quite. This is probably to help distinguish the orientation of the flow cell while keeping material costs and design complexity low.

There isn’t too much to say about the backplate. It’s 2.5 mm thick and made of some soft metal that I scratched while breaking the plastic rivets.

This is likely just some CNC-cut metal coating in bluing liquid. The faces of the plate are smooth and the edges are beveled slightly, but the sides are still roughly cut.

Finally, there’s another ID code for the plate itself. There’s also a 2D barcode that notably isn’t a QR code, but my guess is that it contains the same identifying information that’s written to its left for easy scanning.

I don’t know why this backplate is necessary 2. The two uses I can think of are to let the flow cell be manipulated with electromagnets, or to provide some electromagnetic shielding during the sequencing process itself. It must serve some purpose, otherwise the plastic sheathing would be enough to house the glass slide. Having only the plastic would be much easier and cheaper to manufacture, too, so it’s likely there’s some purpose behind it that I’m unaware of.

The glass slide is the simplest looking, but is probably the most complicated piece of the entire flow cell. 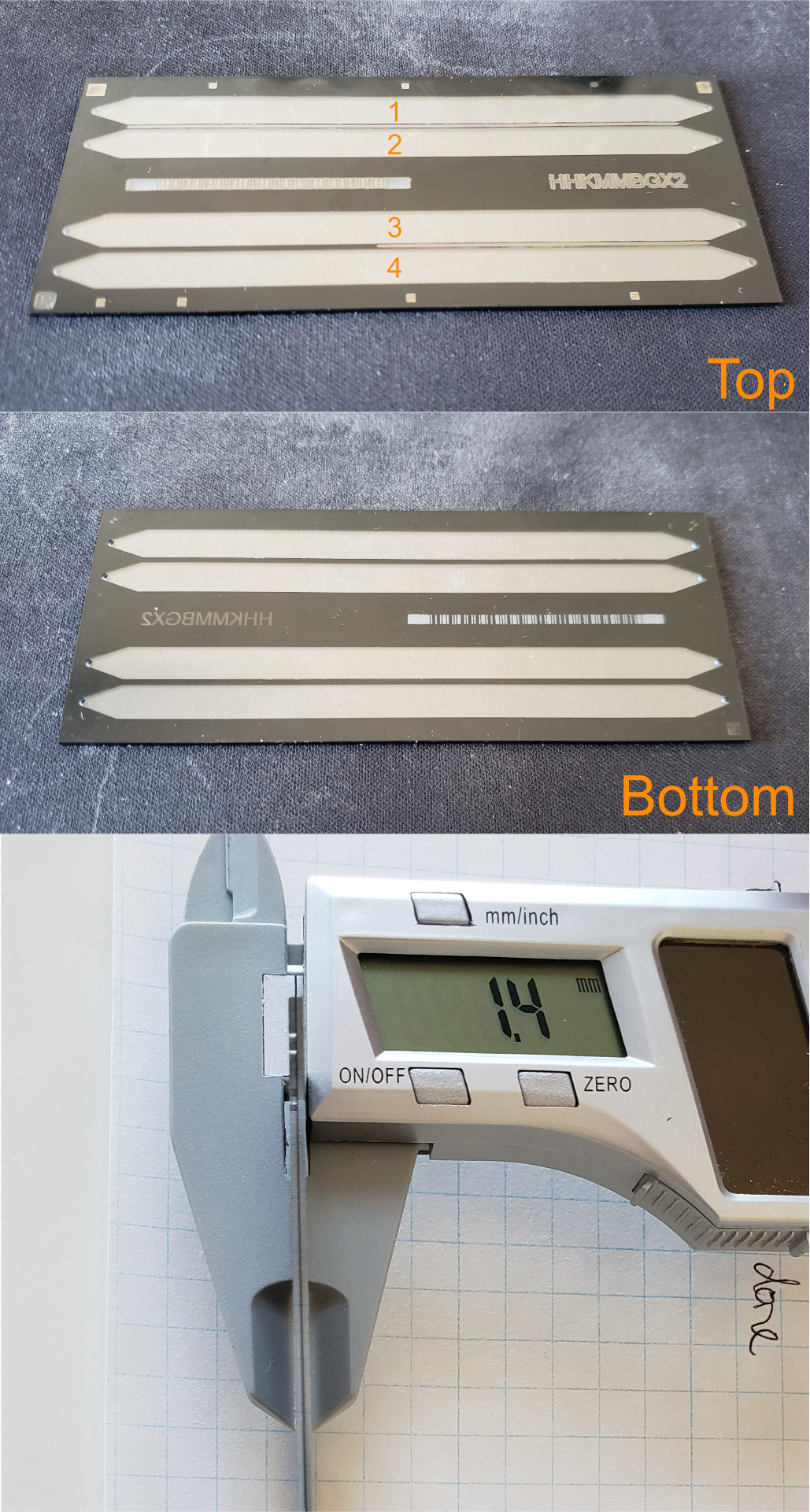 It’s two pieces of glass, 10 cm x 4 cm x 0.7 mm each, sandwiching some film, probably constructed by photo-lithography. There are the four sequencing lanes running the length of the slide, as well as the barcode and alphanumeric code in the middle. Computational biologists probably know what this code is; it’s the ID for the flow cell. If you open up a FASTQ file, you’ll see this ID in the “read ID” line, along with other information like the x and y tiles the read came from. After some image processing, here’s a clearer version of the barcode.

What is this barcode? Turns out it’s just the flow cell ID, again. But this is easily machine readable and is almost certainly used by the sequencer when writing the read data to the hard drive. There are some other markings on the slide, too. 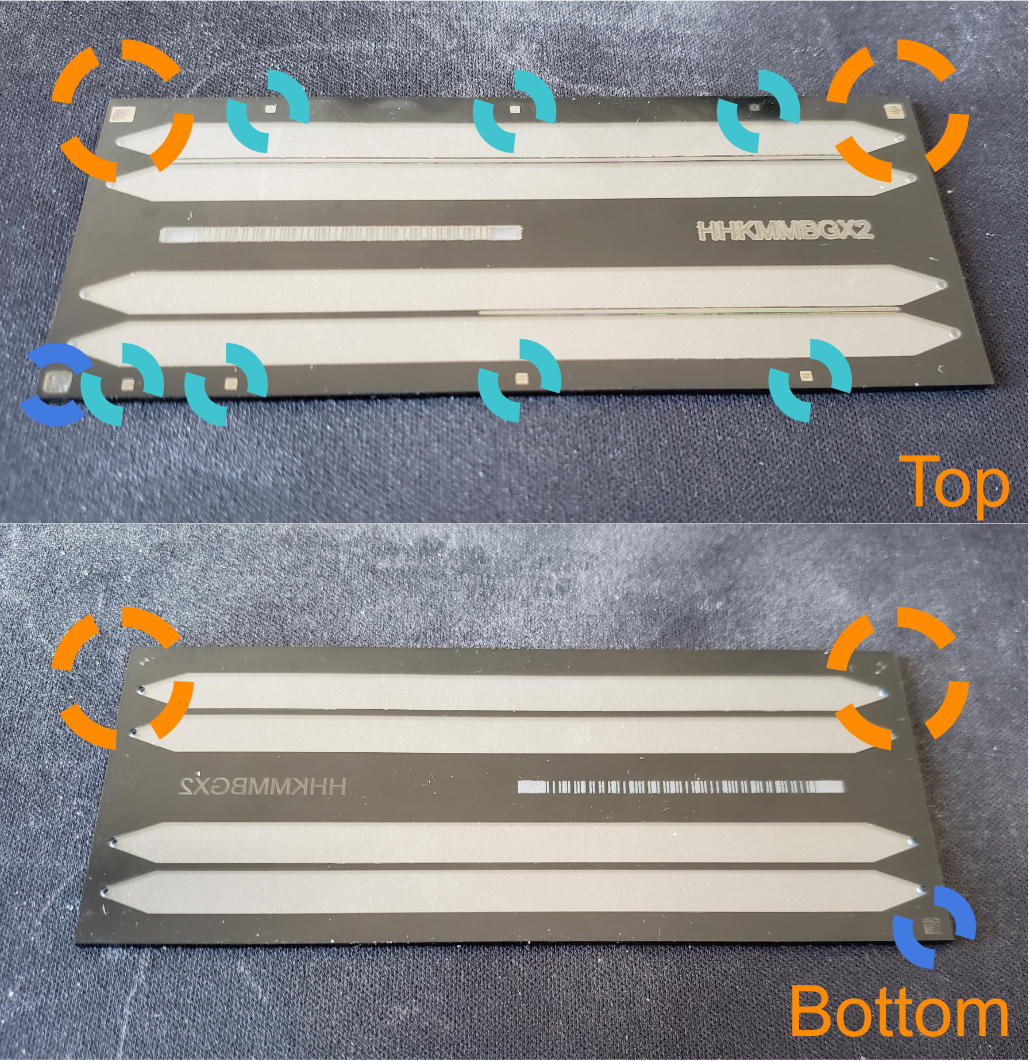 The bottom left corner has a 2D barcode, but the two top corners have a square with quarter circles cut in them. The barcode can be seen from the back side, as can the quarter circles, but the squares on the top corners can’t, for some reason. The same is true for the 7 square markers along the top and bottom edges of the slide. Either the middle film is created in layers, or there are actually two thin films sandwiched between the glass panes, each of which are constructed differently. Oddly enough, there look to be some + signs etched into these squares along the edges on top of some small unique pattern in each square. I’m not sure what these are for; maybe coordinates for orienting during lithography.

On the bottom pane, there are holes into each sequencing lane, on both ends. This is where the sequencing samples are physically loaded into the flow cell. You can imagine how little liquid can actually fit into the lane at a time, given how thin the space between the glass planes is. What’s even crazier is how much data you can collect from this miniscule amount of space.

The last components are the rubber stoppers. There are four of these stoppers in kind of a unique design, almost like a slice of bread.

They’re each about 1 cm wide and have a different design on the front and back. Compare the left-most stopper to the others to spot the differences.

Interestingly, the stoppers themselves have some identifying code etched into them. Like everything else with a unique identifier, this is probably for tracing batch errors in the assembly process 3.

Like the plastc sheathing, the stoppers have a faint line around the edge that suggests some type of injection molding process. But with the ID code taking up a good amount of space in the cavity, there isn’t a good place to hide the injection site hole, and you can see it on the top and bottom crusts, so to speak.

The holes on these stoppers line up perfectly with the holes in the glass slide sequencing lanes. With the holes being so small, these stoppers help guide the pipette tips into the right space and cushion them to prevent damage. Like the metal backplate, there’s such an interesting design in such a small component that it has to be important. It’s too costly and complex to manufacture to not have a vital function.

Everything in this flow cell is precisely engineered, it’s cool to see something like this up close. With something so small and so well-designed, you can imagine how many different designs these things went through. And this is just one small part that goes into a sequencer. You can imagine how many man-hours go into the entire sequencer, itself.

It’s also interesting to see how much effort goes into keeping track of the parts themselves. Unique ID codes for each part, barcodes, and NFC tags for fast information retrieval in different ways, and hiding the codes away as to not distract from the overall design itself. It’s extremely clever, I’d love to see more sequencing parts like this.

For many computational biologists, their work starts with sequencing data. But that data obviously doesn't appear out of nowhere. To bring that side of molecular biology a bit closer to home, I got my hands on an old flow cell and take it apart to see what it's made of.